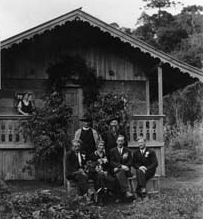 By the time Gisa grew old enough to go to school, the rudimentary communal barracks had transformed into small neat houses and productive farms, and the settlement of Dreizehnlinden into a community complete with a church and a store, as well as a school.

As stonemasons and bricklayers, Gisa’s father and her two eldest brothers played an integral part in laying the foundations on which the community grew. In 1937, the town’s seasoned workmen completed its crowning accent, a tall red-brick residence sitting high on a hill for the settlement’s founder, Andreas Thaler. They called it Das Kleine Schloss—The Little Castle—or O Castelinho in Portuguese.

Gisa gloried in walking past the castle and stopping to gaze up into the windows in the tall round tower. She would exclaim wistfully in her small five-year-old voice, “a real castle, right here in Dreizehnlinden!” to which her sister, or whoever was with her, would reply: “Silly girl, you’ve never seen a real castle before. In Austria, there are many castles.”

“In Austria…in Austria…” A statement Gisa heard often as a child. Her family had left Austria to find a better land, a better life. Yet, their hearts remained tied to the Homeland. Their memories fixated on the mountains, the comradeship, the feasts, to the exclusion of the overcrowding, the religious discrimination, and the hunger that had driven them to leave. Nostalgia does that.

Her father, a tall wiry man with large calloused hands, called Gisa his “Little Brazilian”. Even at five, she felt the condescension. When she occasionally interjected a Portuguese word or phrase, which she picked up so naturally, into conversation, her family chided her: “Deutsch, Gisa, Deutsch.”

Outside Dreizehnlinden’s isolated community, Brazil’s political structures shifted on tenuous footings. On November 10, 1937, based on the pretext of protecting the country from a communist revolution rumoured to have support from the Communist Party of the Soviet Union, Brazilian President Getúlio Vargas staged a political coup. With military and popular support, he called a state of emergency, dropped the Constitution of 1934, banned all political organizations, dissolved the Congress, and proclaimed himself Dictator over this Estado Novo (New State). Under Vargas’ nationalist agenda, power shifted from the states to the central government, and from the landowners to the urban middle and lower classes. Dreizehnlinden’s inhabitants read about these changes with mild concern; constitution or no constitution, life continued.

The end of 1938 found only her youngest brother, age 20, and her sister, age 17, at home with Gisa. Her two eldest brothers—strong and self-reliant, in their late twenties—had married two sisters from within one of the Austrian colonial families and established homes of their own. Not long after, her two sisters next in line—healthy, robust girls in their early twenties—had each married as well. At home, Gisa’s youngest sister, Teresa, had taken over much of the housekeeping while their mother tended their garden and chickens. Like the rest of the men in her family, her youngest brother worked in construction.

In 1939, Gisa’s world widened to attending school. Walking to and from by herself—a tiny, wisp of a child, small for her age, and so slight in comparison to her sturdy, grown siblings, with fine blond hair tied in braids down her back. She surveyed everything around her with intense seriousness through ever-changing blue-grey-green eyes—eyes the colour of the sea she had been born on. And so she grew, apart from the rest, and only partly aware why.