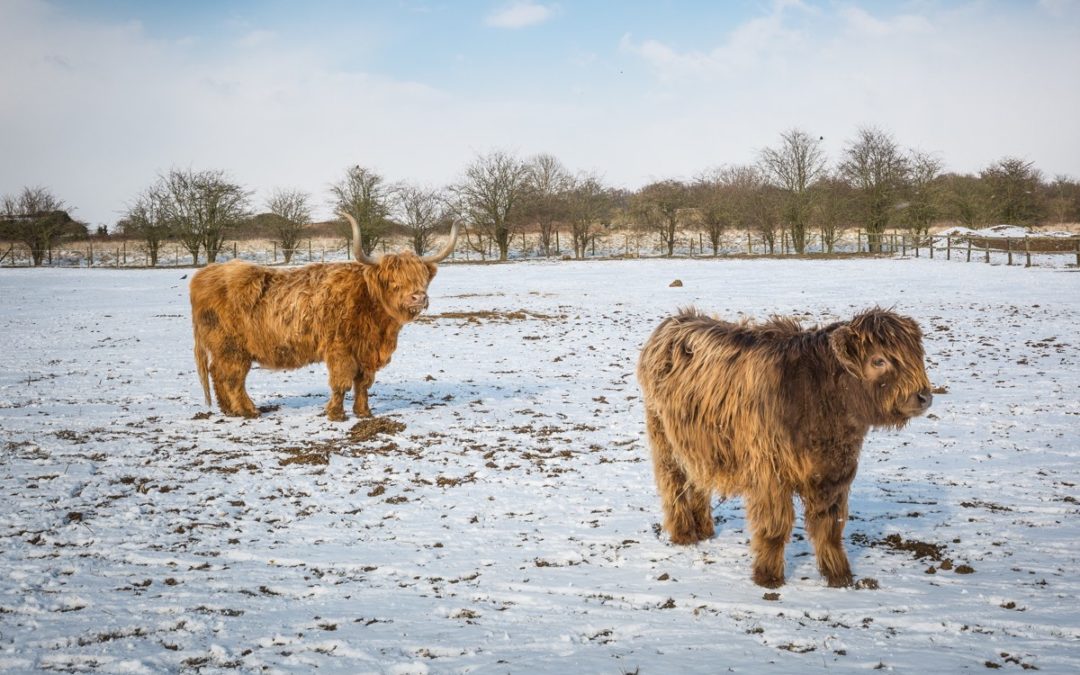 Every year, I am surprised and overjoyed by new, local sources for free-range meats and organic foods that we see popping up around us. When we first started sourcing our food directly from farmers, we often had to travel 40 – 200 kilometres to get it. Today, we have many more options, just around the corner from us! One of these new options is Nature’s Choice Farm, owned by Mark & Mary Martin.

As often happens, we came across Nature’s Choice Farm on a country drive, only about 5km away from us (now, that is local!). We followed the long driveway, past woodland, and then into beautiful, golden, open pasture where we found Mark. He was friendly and open—we chatted with him about his farming methods, and he showed us his herd.

Mark raises heritage breed Highland cows, which he has been breeding with an Angus bull. Originating from Scottland, Highland cows have long hair and large horns. From Wikipedia: “Highlands are known as a hardy breed due to the rugged nature of their native Scottish Highlands, with high rainfall and very strong winds. Their hair gives protection during the cold winters and their skill in looking for food allows them to survive in steep mountain areas. They both graze and browse and eat plants, which many other cattle avoid…. The meat tends to be leaner than most beef because Highlands get most of their insulation from their thick shaggy hair rather than subcutaneous fat. The coat makes them a good breed for cold northern climates and they are able to thrive in outdoor conditions that would defeat most other breeds of domestic beef cattle.”

Grass-fed beef can be overly lean (factory-farmed cattle are confined and encouraged to binge on corn before they are slaughtered, to create very fatty…and very unhealthy…meat). However, Mark has tempered the leanness of the Highlands by breeding them with an Angus bull. Angus beef is known for it’s marbling—the Angus cow stores its fat within its tissue. The combination results in a wonderful beef.

Mark also understands the importance of following the natural cycle that all animals follow—he butchers in the late Spring, or early Fall, when the cows have fattened naturally on lush grass and have also replenished their nutrient stores, making their beef as nutritious as possible.

Mark also feeds his cattle silage in the winter. Silage is made by tightly wrapping green grass and allowing it to ferment between the time it is harvested and fed to the cows. Although feeding silage to cattle is controversial (although much of the controversy is associated with silage made from grains, not grass), Mark believes that the fermentation process breaks down and multiplies the nutrients in the grass, making it a super-food for the cows in winter. (Since we consume naturally fermented foods for the same reason, he may be onto something with this theory!)

Mark’s cows do have a shelter that they can retreat to in winter but they are not confined. Their long hair allows them to winter comfortably outdoors. Since his cows eat what nature intended them to eat (grass only, NO grains) and live where nature intended them to live (outdoors on pasture, not confined to a barn), they are healthy and resistant to disease. There is no need to administer any kind of drug or antibiotic to them so they are drug-free.

Mark treats his animals with care. Some farmers remove the horns from their cattle, saying that the horns are too dangerous. Of course, removing the horns must be painful and traumatic for the animal and also removes a defence mechanism. Pastured cows are out in the fields overnight—they need to be able to defend themselves against coyotes and wolves, which are native to the area. Mark also allows the mothers to raise their calves and wean them naturally—none of those horrible calf huts on this farm.

We ordered two cows from Mark, to be ready in late October, early November.