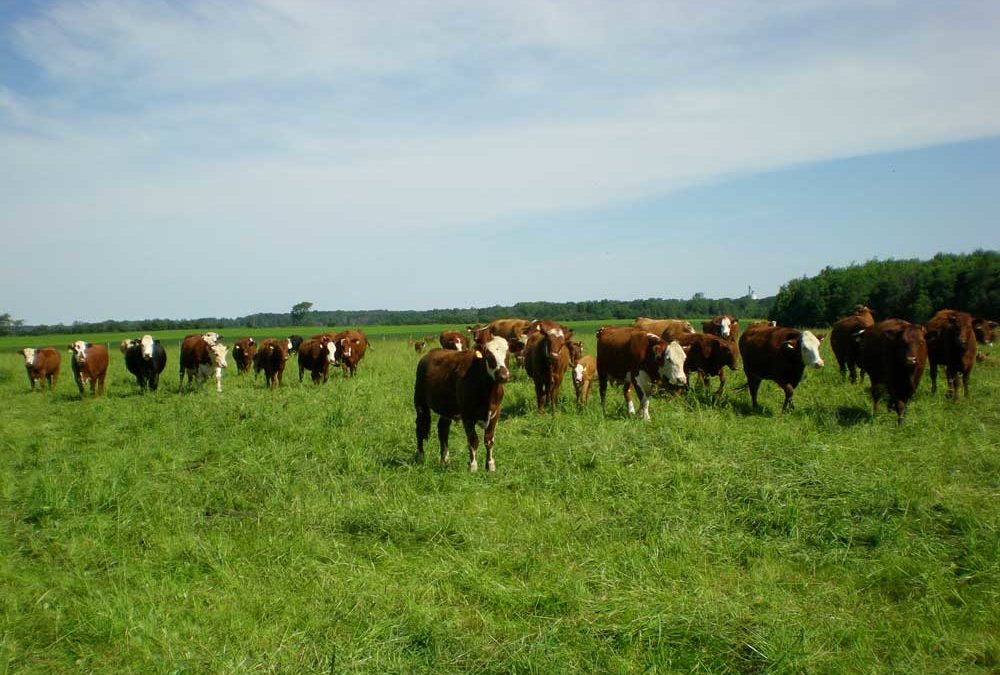 This year, our quest for the healthiest beef possible led us to Echo Valley Ranch in Moorfield, Ontario, where rancher, Brad Martin, gave us a tour of his family’s ranch on a hot summer day.

Our family piled into his practical, well-used pickup truck and we drove out to see his herd of heritage breed Hereford cows. I have never been on safari, but I imagine this experience pretty close as the vehicle took us off-roading over terrain I didn’t think one could drive over, even in a pickup.

As we headed out, we caught site of Brad’s sons out on horseback to check a calf, wearing chaffs and looking the part of true ranch-hands. Brad told us that they do most of their work on horseback. He pointed out aspects of the grassland setting we entered, not a building in site. Over the course of a decade, he has been returning this land to its native grasses, weeding out the alfalfa and other non-native plants.

Brad divides his grassland into squares large enough to feed his herd for 24-48 hours before they move the fences over a plot onto fresh grass. In the time that the cows graze on a plot, they eat the mature, tall grass, and stamp down the undergrowth, mixing it with their nutrient/nitrogen-rich manure and urine. The natural composting process adds nutrients and exposes the new young shoots. Unlike traditional farming, in which the soil is laid bare, this system actually builds soil, making it extremely environmentally friendly.

When we reach the herd, we are astounded by their behaviour. Brad’s cows are not your standard, lackadaisical herd of modern cows scattered randomly over the entirety of a field, looking up from chewing their cud with dozy disinterest. His cows behave more like the herd of wildebeests captured on Mutual of Omaha’s Wild Kingdom when I was a kid. These cows have retained their natural herd instincts. They travel together in a tight pack, led by the dominant male, running together, changing direction together. Watching them was quite extraordinary and really hit home how “unnaturally” modern cows behave.

Brad’s cows never, ever receive grain—they eat nothing but grass. In fact, Brad only supplements their diet with dry grass (hay) for about 45-days per year, which is quite amazing. He brings water out to the cows and they continue to forage under the snow for grass. His cows also never leave the pasture—they have never been confined to a barn. In the winter, they stand close together in a pack to retain body heat and they use the fat they stored in the Fall when grass is limited.

In fact, this natural cycle is very important to the quality of Brad’s meat. Just like animals in the wild, his cows follow a natural yearly cycle—they thrive on the lush, protein-rich grasses in the spring and summer, building up a layer of fat and then use that fat as fuel to keep warm and survive until spring without requiring shelter or grain-based food rations. For this reason, Brad butchers his animals in the late Spring or Fall, when they are fattest, ensuring that their meat is well-marbled. Grass-fed beef has a reputation of being too lean—not Brad’s—because he understands and respects their natural cycle.

Brad respects the lifecycle of his animals and the animals themselves from the beginning of their lives to the end. He has chosen his abattoir and his butcher with care. He travels with them to the abattoir to ensure they are treated with the utmost respect and then follows the meat to the butcher, ensuring that the resulting meat is the finest quality available.

In fact, Brad is an advocate of bringing mobile butchering facilities to southern Ontario because he knows that sparing his cows the trip to the abattoir is more humane and using a mobile butcher on his own property ensures that the meat from his cows cannot possibly be contaminated with lesser-quality meat being processed on the same day.

We put in our order for a cow for our family, which we would pick up from the butcher at the end of October.

You can find out more about Echo Valley Ranch on their website: http://evrgrassfed.com/